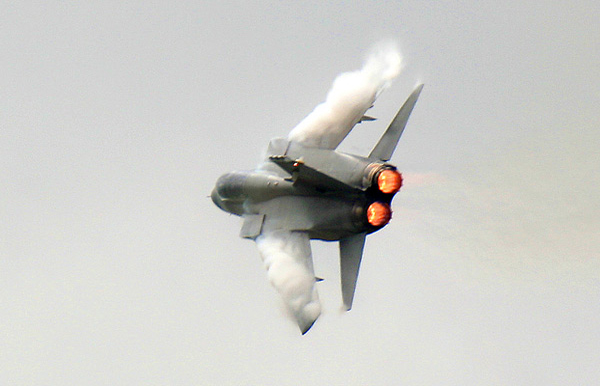 The Tornado was jointly developed by the United Kingdom, Germany and Italy and first flew on 4th August 1974. A total of 992 aircraft were built with production finishing in 1999. As well as the three main operators, Tornados were also bought by RSAF (Royal Saudi Air Force) and are still in service now.

For many years Tornado crews were trained at the Tri-National Unit at RAF Cottesmore, but when this unit was disbanded RAF training was moved to RAF Lossiemouth with No. XV (Reserve) Squadron, who still operate Tornado GR4s today.

One RAF squadron still operates the F-3 air defence version, being 111 Squadron at RAF Leuchars in Scotland. All other aircraft are based at RAF Lossiemouth and RAF Marham with GR4s.

RAF Marham is home to part of the RAF's GR4 Tornado force. Having four squadrons of Tornado GR4s on strength, 2, 9, 13 and 31 Squadrons. Marham is one of the busiest RAF bases in the area. The other GR4 Tornados are operated in Scotland at RAF Lossiemouth.

RAF Marham hosted a press and media event on Tuesday 26th January. This event was arranged to introduce the media to No. 31 Squadron, who have just returned from a three month tour in support of Operation Herrick in Afghanistan. The object of the event was to demonstrate the Tornado GR4 and the weapon systems and personnel who use them.

Marham's Station Commander (Group Captain Peter Rochelle) was on hand talk to the media as was the officer commanding 31 Squadron Wing Commander Ian Gale. Other members of the squadron were also on hand including 31 Squadron's lady pilot Flt Lt Juliette Fleming.

Members of the ground forces who support the Tornados gave a demonstration of how the information is interpreted back on the ground in one of their mobile units.

Wing Commander Gale described how the Tornado was used in Afghanistan which included overflying insurgents over 500 MPH at 100ft, which forces them to take cover. This policy means that the RAF is using the minimum amount of munitions which has reduced the possibility of killing innocent civilians. The Tornados also use their sophisticated equipment to detect the presence of IEDs (Improvised Explosive Devices) and mortar firing positions.

Many thanks to Squadron Leader Jenny Dennis Media Communications Officer and her staff for organising the event.

Yorkshire's last Tornado squadron disbanded at RAF Leeming on Friday 4th April 2008. 25 Squadron which has been stationed at RAF Leeming since 1989 flying the F3 Tornado. This just leaves RAF Leuchars in Scotland to soldier on with the last F3s until they are finally replaced by the Typhoon.

The event was overshadowed by the weather but even this could not put a damper on the proceedings with the conditions improving throughout the day. 25 Squadron's disbandment ended up as a friendly and well organised event. A tribute to a fine aircraft and a farewell to Yorkshire.

RAF Leeming said goodbye to No. 11 (F) Squadron and its Tornado F3s on 31st October 2005. The 90th anniversary jet was parked on the parade ground opposite the Squadron's Lightning also marked up in 11 Squadrons colours. As the reviewing officer Air Chief Marshal Sir Michael Graydon took the salute, a four-ship formation of 11 Squadron aircraft overflew the parade. Some of 11 Squadron's F3s were retired with others being taken up by the remaining squadrons. The Lightning was moved down to RAF Coningsby ready for No. 11 Squadron when it reformed with Typhoons later in the year.

RAF Cottesmore became the home to the Tri-National Training Establishment (TTTE) in early 1981. Which undertook the training of the Panavia Tornado pilots from the RAF, Luftwaffe, German Navy and Italian Air Force.

Cottesmore operated a large number of GR1 Tornados from one large dispersal and was one of the RAF's busiest Tornado stations in the country.