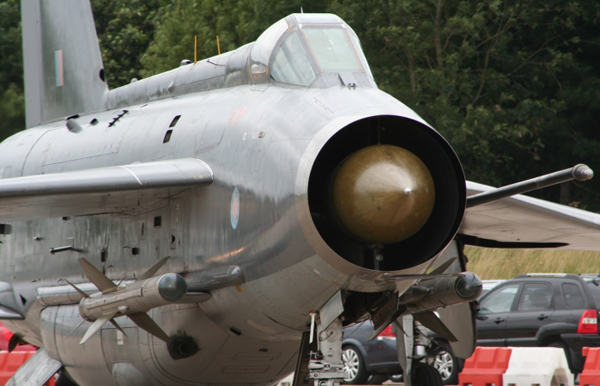 The origins of the Lightning Preservation Group (LPG) go back to the summer of 1987 when the idea of trying to preserve a Lightning was muted at RAF Binbrook’s crash gate 3.

As 1987 moved into 1988 an air of depression fell over all followers of Warton’s finest, as not only was the Lightning coming to the end of its 28 year reign, but on top of this RAF Binbrook would be closing.

From the original crash gate 3 discussions, a small group of twelve dedicated Lightning enthusiasts formed the LPG. In May 1988 seven aircraft were put up for tender by the MOD and the determination of the LPG was rewarded with the allocation of Lightning F.MK6 XR728/JS to the Group. The added bonus was that this aircraft (known as the Binbrook Flagship) was John Spencer, the Station Commander’s aircraft. The aircraft was flown from RAF Binbrook to Bruntingthorpe on 24th June 1988 by Flt Lt Chris Berners-Price of 11 Sqn.

The LPG’s second Lightning enjoyed an extended life back at its birthplace, English Electric’s Warton Airfield, now BAE. This aircraft, XS904, another F.MK6, along with two other Lightnings, flew as chase in order that new Tornados could test their Foxhunter radars on a high speed target. This programme was concluded in December 1992 and all three Warton Lightnings were put out to tender. Again the Group focused its attention on purchasing another Lightning and XS904/BQ flew from its birthplace to Bruntingthorpe on 21st January 1993 in the hands of Peter Orme, British Aerospace’s Deputy Chief Test Pilot. This was to be the world’s last Lightning military flight.

During the late summer of 1993 The LPG became aware that the RAF Wattisham Quick Reaction Alert (QRA) hangar was to be demolished due to the new build Search & Rescue hangar to be built in its place. After detailed discussions with the MOD the contractor (Trafalgar House Construction) donated this historic building to the LPG in November 1993. After dismantling in January 1994 the building was removed up the A14 to Bruntingthorpe on 5 forty foot trailers.

After fundraising, our generous supporters contributed the sum of £130K. Reconstruction commenced in 2004 with completion achieved in July 2010.

The building and aircraft are a memorial to the “Lightning Force” which guarded UK airspace 24/7 throughout the Cold War.