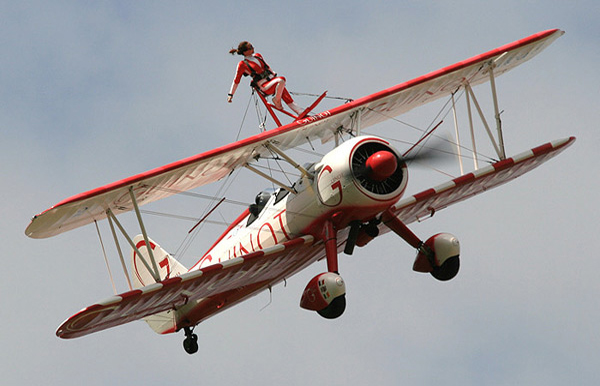 These aircraft perform a well choreographed routine which includes a variety of loops, rolls and turns, whilst the girls demonstrate their skills by doing acrobatic manoeuvres while they are strapped to the top of the wings of the aircraft. The girls face speeds of up to 150mph and up to 4G of g-force. The wing walkers even climb back into the cockpit when they have finished their display while the aircraft is still in motion.

Wing walking has been around since the 1920s and seen at air shows and barnstorming events. The first wing walker to perform daring stunts was Ormer Locklear, it is rumoured that during World War I during his pilot training in the Army Air Service he first climbed out onto the lower wings. It is also said that after this anytime an aircraft had a mechanical failure he climbed out of the cockpit onto the wings.

On 8th November 1918 Locklear wowed the crowd at Barron Field, Texas with his wing walking stunts. After Locklear's first demonstration wing walking continued to play an important part in the Army Air Corps (US Air Force) and the Navy in the advancement of aviation. Locklear's female equivalent Ethal Dare was the first woman to switch planes in the air. Some of the other people to become famous as aerialists were Charles Lindbergh and Mabel Cody, the niece of Buffalo Bill Cody.

The world's only aerobatic formation team has a new sponsor. Having been representing several well known brand names in the past, as of 2010 the aircraft have a new paint scheme and are now known as The Breitling Wingwalkers.