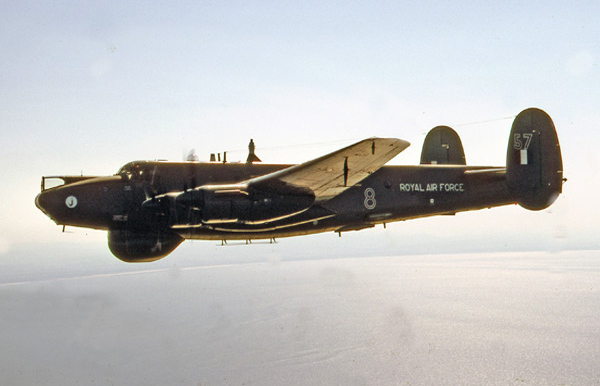 The Avro Shackleton was developed from the Avro Lincoln bomber. The aircraft was designed by Roy Chadwick in the late 1940s and the design was named after the polar explorer Sir Ernest Shackleton. The design used the Lincoln's wings and landing gear and fitted them to a new fuselage. The engines were Rolls-Royce Griffons with 13 ft contra-rotating propellers.

The aircraft was first flown in March 1949 and the MR.1 version was delivered to Coastal Command in April 1951. Weapons carried were nine bombs, or three torpedoes or depth charges and the aircraft was also fitted with a 20mm cannon. Two other main versions of the Shackleton were built. The MR.2 which had several modifications including a strengthened undercarriage and modifications to the nose and tail sections. The MR.3 was the last version to be built with a tricycle undercarriage, also major modifications to the fuselage and also new wings, because of the extra weight of the aircraft Armstrong Siddeley Viper Mk.203 turbojets were fitted to the RAF aircraft to help with the takeoff.

A total of 185 Shackletons were built from 1951 to 1958, all delivered to the RAF accept eight aircraft, which were delivered to the South African Air Force. The RAF continued to use the Shackleton in the AEW role until their retirement in 1990.