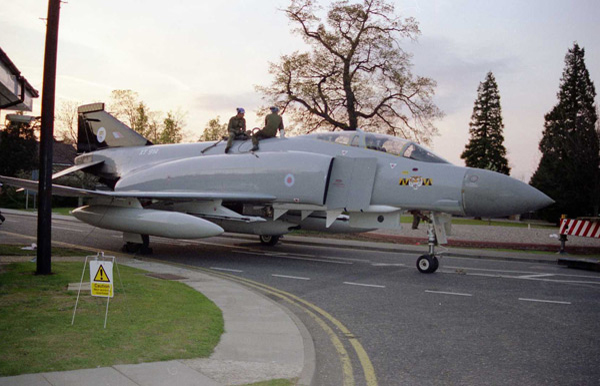 The F-4 Phantom first flew in 1958 and was operated by the United States Air Force (USAF) and US Navy. Among the other operators of the Phantom were Germany, Greece, Israel and Japan. The Phantom entered service with the RAF in 1969, with No. 6 Squadron at RAF Leuchars in Scotland. No. 74 Squadron was the last Phantom squadron to serve with the Royal Air Force at RAF Wattisham in Suffolk, which disbanded in 1992. There are several examples of the aircraft on static display in the UK, including XT914 the gate guardian at RAF Brampton near Huntingdon and two aircraft at the Imperial War Museum at Duxford.

RAF Brampton's new gate guardian McDonnell Douglas Phantom FGR.2 XT914 arrived at RAF Wyton by road before being moved down to Brampton, the various parts were positioned in the NAAFI car park. The aircraft was reassembled by a team from RAF St. Athan. It was then lifted over the hedge and towed along the road past the guardhouse, before being lifted by crane and positioned on the plinth.