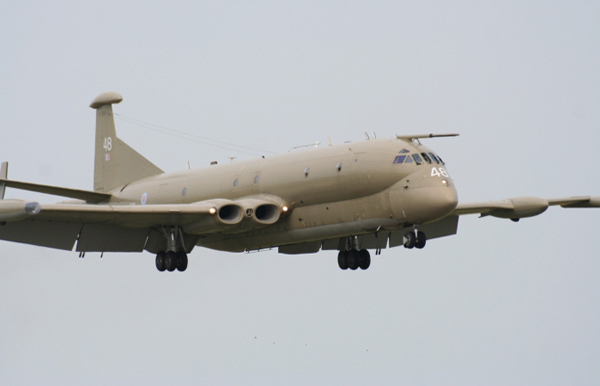 The Hawker Siddeley Nimrod was a direct development from the de Havilland Comet. Mainly designed for Maritime operations, the Nimrod was the successor to the Avro Shackleton and took over the Maritime role in the early ’70s. There were also three R1 reconnaissance Nimrods built which replaced 51 Sqns Comets at RAF Wyton, later moving to RAF Waddington, with another aircraft being converted at a later date to R1 standard. Eleven aircraft were converted for the Airborne Early Warning and Control (AEW&C) role, but were not used and were later used as a spares source for the rest of the fleet. Starting in 1995, 32 aircraft were upgraded to MR2 standard and some of them continued operating at RAF Kinloss until 31st March 2010. With several aircraft being located for delivery to aircraft museums.

At precisely 11am on Friday 29th July, Nimrod R1 XV249 took off from its home base at RAF Waddington for the last time, after takeoff the aircraft turned and flew across Waddington’s runway before turning once again and carrying out one final flypast with loads of power with a final steep climb up through the clouds. This was the last ever Nimrod flight with XV249 being flown down to Kemble Airport to be dismantled and being moved by road to its new home at Cosford Air Museum. 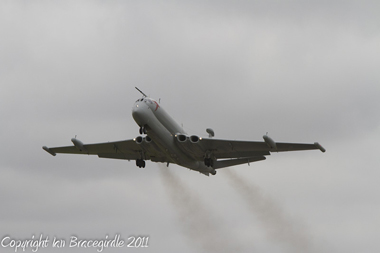 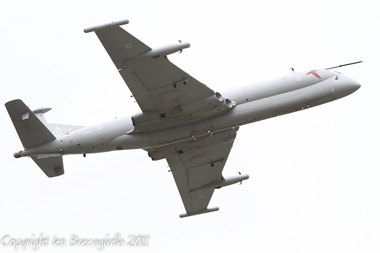 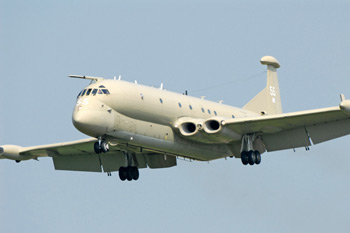 Norwich Museum took delivery of its latest exhibit, Nimrod MR2 XV255 on Monday 24th May 2010. The aircraft had flown down from its home base of Kinloss in Scotland. This aircraft has been allocated to Cosford Air Museum but due to the length of Cosford's runway, was reallocated to the city of Norwich Aviation Museum instead. 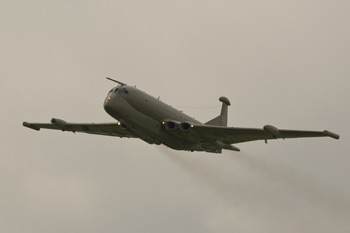 Nimrod MR2 XV232 landed for the final time at Coventry Airport on 11th May 2010, touching down at 12:17 hours. The captain of the aircraft (Squadron Leader Roxborough) handed over the logbook to Mr Mike Collett, the Chairman of The Air Atlantique Classic Flight (www.classicflight.com). The Nimrod will be kept in taxiable condition by The Classic Flight and will be a major attraction at the newly opened 'Airbase' facility at Coventry West, along with a significant number of other historic aircraft, many of which are kept in flying condition. The Nimrod sits very well at Coventry, next to her predecessor, the Shackleton, the airframe of which is in the process of being brought back to taxiable condition.

These images were taken from a cherry picker on the apron at Coventry West; a cold and rather scary vantage point!

Write up by Simon Westwood 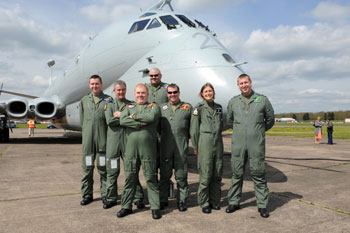 On Tuesday 27th April a small group of aviation enthusiasts and photographers eagerly awaited the arrival of Nimrod MR2 XV226. At 11:15am the aircraft appeared from behind the trees in what was near perfect weather conditions. After carrying out a graceful run-and-break, 226 carried out a roller along Bruntingthorpe's runway, before touching down for the very last time. Having transited down from Scotland and saying a final farewell to Cottesmore on the way down, the Kinloss ground crew saw the aircraft in on one of Bruntingthorpe's dispersals. As her engines were shut down her new owner David Walton waited to greet the crew and receive the 700. XV226 will be kept in ground running condition and should be joining the Victor, Comet and Lightnings for fast taxi runs very soon. 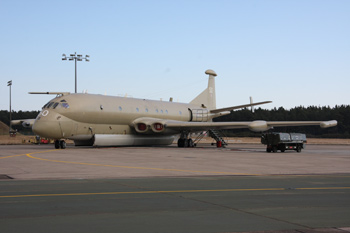 Sadly the time has come to retire the MR2 Nimrod, known as the mighty hunter, based at RAF Kinloss in Scotland.

It was announced at the end of 2009 that the MR2 Nimrod would be withdrawn from service by 31st March 2010. The aircraft operated by crews of 120, 201 and Number 42 (R). The Nimrod MR2 performed a variety of roles, including surveillance over land and sea and also search and rescue purposes. The new Nimrod version 'the MRA4' will be entering service at a later date. For all personnel who served at RAF Kinloss, it will be a sad day when the last Nimrod MR2 departs this major Scottish airfield. 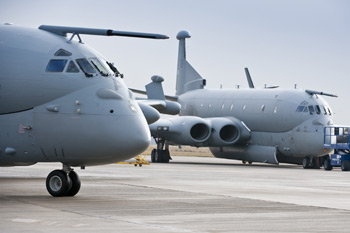 The Nimrod MRA4 is essentially a new aircraft, with a fully refurbished fuselage, a new larger wing and Rolls-Royce BR710 turbofan engines. The wings are designed and manufactured by BAE Systems and the glass cockpit is similar to the Airbus A340. The aircraft are built at BAE Systems at Woodford, Cheshire. With the numbers of the MRA4 slimmed down it looks as if twelve MRA4s will be built, these include the three development aircraft, which will leave nine airframes which should be going into service in 2012. This will give the UK at least 25 years capability with these aircraft in the Maritime, reconnaissance and attack role. The MRA4 mission systems give the crews the ability to gather and process up to twenty times more data than the Nimrod MR2, the predecessor of the MRA4.