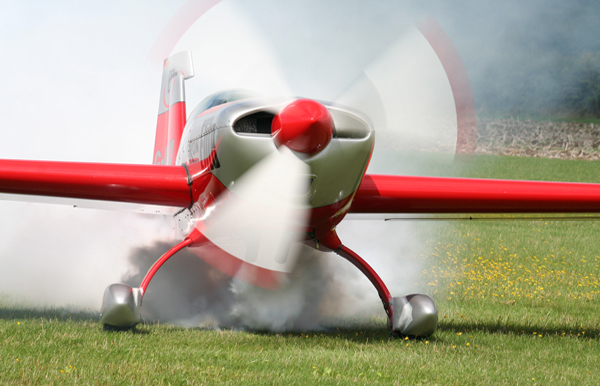 Little Gransden Air Show held in the late summer by kind permission of John and Mark Jefferies and organised by Dave Poile MBE, goes from strength to strength year after year. Representative aircraft include Hurricane, Lancaster, Mustang, Spitfire and Tiger Moth to name a few. A fantastic day out for all the family with various stalls and exhibits, air displays, classic cars and tractors.

Raising funds for Children in Need. 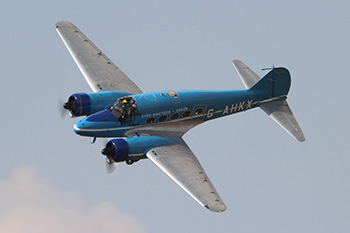 That there was a 21st annual Children In Need Show to report was a huge tribute to the many volunteers who worked tirelessly to defeat the effects of the rain that had fallen continuously for the previous 24 hours, finishing only about 5 hours before the public were due to start arriving. Although the rain had stopped, very heavy overcast and low cloud meant that fly-in visitors didn’t start to arrive until late morning.  A small number of older display participants weren’t able to make the journey.  As a result it was necessary for the display co-ordinator to make real time changes to the flying programme throughout the morning.  Not withstanding this, the crowd was treated to 41/2 hours of continuous and varied displays in the unique sprit of Little Gransden.

Static display items aren’t a major feature of the show but this year an A109HA of the Belgian Air Component made the long journey from Beauvechain allowing the crowd a close look and a chance to talk to the crew.

The show was opened by three items displaying extreme contrasts of performance. Mark Jeffries’s demonstration of the victory of sheer power and human endurance over aerodynamics in the Extra 300/SC was followed by Stuart Luck’s display of the Rans S6-ES build by ATC cadets as part of the Youth in Aviation project. This was followed by the silent and graceful performance by Guy Westlake in the Fox glider.

Classic American aviation was represented by Mike Cummings and Dale Featherby in a pair of Harvards; Lauren Richardson in the Pitts S-1S; Cliff Spink in the Stearman; the Waco UPF-7 and Bob Morcom and Ian Austin in those iconic representatives of the Golden Age, the Spartan Executives. 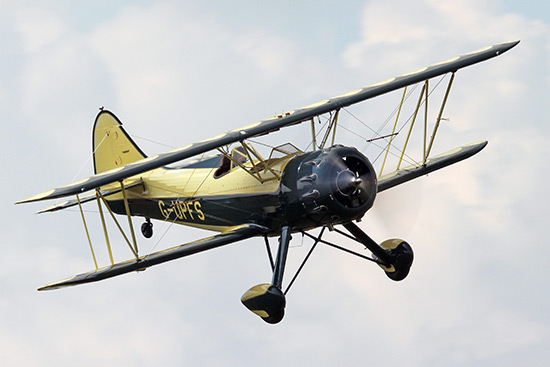 The RAF contribution this year was opened by the BBMF, represented by the Spitfire LFXVIE and Hurricane, with the Lancaster performing later. They were followed by the Tucano T1 from 72(R) Sqn in the current special scheme, inspired by that carried by the squadron’s Spitfires in the Middle East during WWII.

The last generation of Air Observation Post fixed-wing aircraft, before helicopters took over the role, were represented by the Auster AOP11 and Cessna Bird Dog.

The graceful display of the Avro XIX recalling the immediate post-war era, was followed by another Avro product, from a generation later, the Vulcan B2 that was once again the highlight of many spectators’ show. This was followed by an amazing item. Christopher Burkett in the Extra 300/S flew formation aerobatics with a 40% scale model Extra 300 flown with amazing skill. Another unusual routine was Ian Austin’s display of the PC-12; the premier single-engined business aircraft and the modern day equivalent of the Spartan he had displayed earlier. 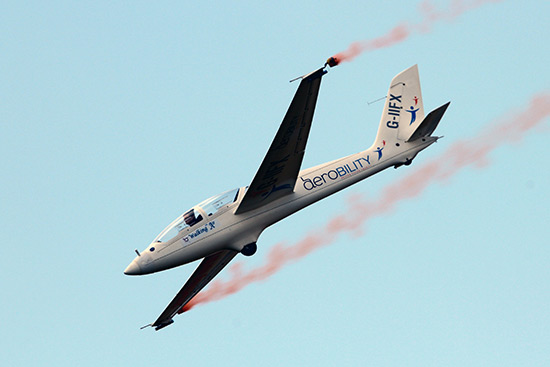 Following the Lancaster was Dennis Neville’s Flying Circus, demonstrating their prowess at flour bombing, balloon bursting and aerial limbo and including their newly introduced “cricket”.

World War II was recalled by Rob Davies in the Mustang hunting down his habitual foe the “Me108” flown by Clive Denney. The final two items were Peter Tiechman in his Hurribomber and a welcome return of the Rolls Royce Spitfire PR19, sporting the attractive scheme of 16 Sqn that it wore when it entered service.

So ended another year of the unique experience that is the Little Gransden Children In Need Show. 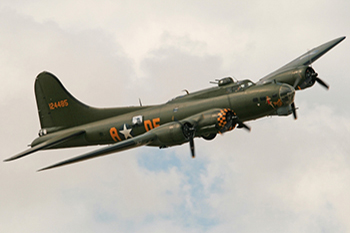 The Little Gransden Children In Need Show 2012 once again recreated the unique atmosphere for which it has been known for the last 20 years.

As expected the fly-in in the morning provided a mixture of old friends and new or newly restored items. Notable arrivals included a pair of Cessna Bird Dogs and no fewer than 8 Chipmunks

The show opened with a Piper Pawnee towing a banner to commemorate the 20th anniversary of the show. This was followed by the Vampire Preservation Trust’s Vampire T11 WZ507.

Warbirds are always well represented at the show and this year was no exception. The T-28 Fennec, P-40M, B-17G “Sally B”, a pair of P-51Ds and a “Me 108” each delighted the crowds. Representing an earlier era was the WWI BE2c with which many RFC squadrons were formed. A particularly poignant part of each year’s show is the act of remembrance that is synchronised with a display by the BBMF Lancaster. 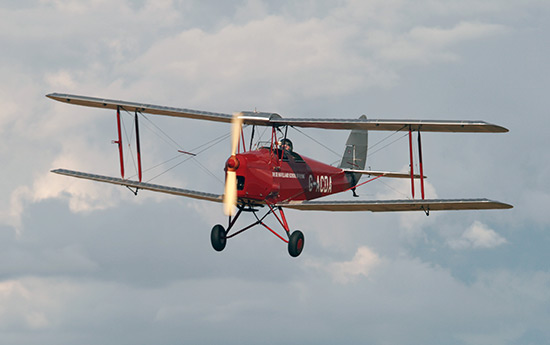 The RAF’s other contribution to the show was the Tucano T1, this year sporting a red, white and blue Diamond Jubilee scheme.

An unusual display demonstrated the development of air observation types. Those displaying were the Cessna L-19E Bird Dog, the sole Auster AOP.11, the ultimate development of the type, the incredible Fieseler Fi156 Storch, and the Bell 47G representing the transition to the helicopter. 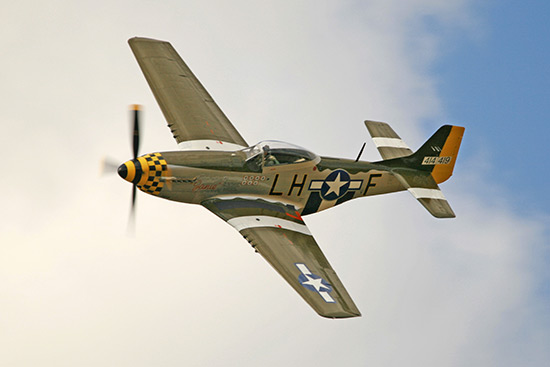 Powered aerobatic displays were performed by Mark Jeffries in the Extra 300/SC, the Trig Team’s Pitts S-1Ds, the SWIP Team’s Twisters, Christopher Burkett in the the Extra 300/S G-EXIL and Diana Britten in the CAP-232. In complete contrast was the silent and elegant, but equally skilful, performance by gliderFX’s MDM-1 Fox glider.

Classic American aviation was represented by a pair of Stearmans, the unique pair of Spartan Executives and a further Stearman carrying a Wingwalker.

For many the highlight of the whole show was Vulcan B2 XH558; the tight venue emphasising the size and power of this iconic aircraft and its amazing manoeuvrability.

The last item of the show was the classic Miles pairing of the Falcon and the Magister; a graceful finale in perfect keeping with the show as a whole. 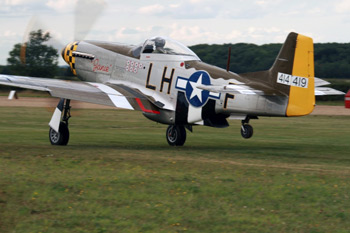 One of the most popular small air shows which has been going for almost twenty years. 2011 had its usual regular participants such as Maurice Hammond with his pair of Mustangs, Justin Needham with the Cessna Bird Dog and one of the largest aircraft seen at Gransden, the Avro Lancaster from The Battle of Britain Flight. These aircraft were joined this year by the Aurora from Canada and Peter Holloway demonstrating the low speed handling of his Fieseler Storch. Another first at Gransden was formation flypasts by a pair of Spartans accompanied by a Beechcraft Staggerwing. Also the pair of Pitts Specials carried out a well synchronised and fast moving display. Other displays were carried out by The Piston/Jet Provost Team, The SWIP Team in their Twisters and the usual polished aerobatics performed by Mark Jefferies in his Extra EA-300SC. Weather conditions were not by any means perfect but with some superb flying and the usual vintage cars, tractors and motorcycles, there was something here for everyone. 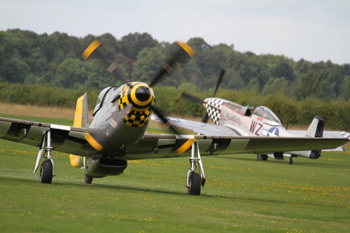 What has become one of the areas much looked forward to small air shows (but not too small) with that friendly family atmosphere. As usual, organised and run by Dave Poile MBE and his team of very able volunteers, topped off with FlyPast's editor Ken Ellis and his own special blend of commentary. All made possible by the generous use of Little Gransden Airfield, courtesy of John and Mark Jefferies.

This year's air show was hampered by strong winds, which made it impossible for some of the participants to transit to the airfield. The shortfall was made up by other participants and a tremendous effort by Peter Teichman, who put on his usual polished display in his Hawker Hurricane IIb, also Tom Maloney in the BAC Strikemaster. Both who battled strong winds to get from their base at North Weald in Essex.

Little Gransden was also graced with three Mustangs, Maurice Hammond's Marinell and Janie, Dave Evans flying Janie and Rob Davies in his Big Beautiful Doll. Other displays of note were Mark Jefferies putting on his usual meticulous display in the Extra EA-300SC and an added bonus of Dave Ratcliffe doing a flypast in The Historic Flying Limited Spitfire. With all this mention of aircraft, we must not forget the fantastic array of classic cars, motorcycles and military vehicles on display. Finally a big thank you to some of the people behind the scenes, namely the hardworking aircraft marshallers and the support from the fireman, ambulance crews and police. 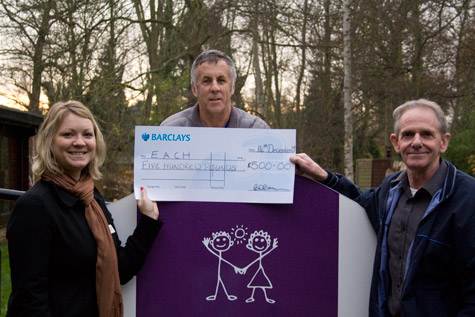 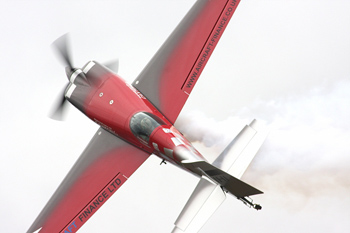 The Little Gransden Show with a fantastic crowd of over 5,000 people raising a mind boggling £51,000 before the final bills are paid. A super line up of aircraft as usual, unfortunately The Battle of Britain Flight Lancaster was unable to attend due to a strong crosswind at RAF Coningsby.

The standard of flying and diversity of aircraft more than made up for the overcast skies and freshening wind. Some of the usual participants gave their support such as Tracy Martin in the Bell 47 Sioux, The Turbo Team and Captain Dennis Neville's Flying Circus with their flower bombing and balloon bursting displays. Also Peter Holloway with his aircraft from Old Warden and Mark Jefferies in his new Extra 330SC gave a flawless display. An added bonus for this year was Nigel Pickard's pair of Spartans, unique to this flying display, flown by Ian Austin and Mark Jefferies.

New for this year Peter Teichman in his newly restored Hurribomber and John Elliot in the two-seat Autogyro. The Bulldog, Chipmunk pair took us back to the yesteryear of RAF flying training. A vintage Yak 18 flown over from Belgium. Maurice Hammond and Dave Evans brought over Maurice's pair of immaculate Mustangs and in a moving tribute to the late Ian Davis, who was tragically killed last October in a flying accident, Clive Denney performed a polished flying display in the Chipmunk.

Finally the Vampire from North Weald being the only jet display at Little Gransden finished off the show. A big thank you to some of the people who make Little Gransden possible, Mike Woods, Ken Ellis, the fire and ambulance cover, the hardworking aircraft marshallers and many more people behind the scenes who we haven't got time to name. Finally Mark and John Jefferies who without their airfield there wouldn't be an air show and Dave Poile MBE the organiser. 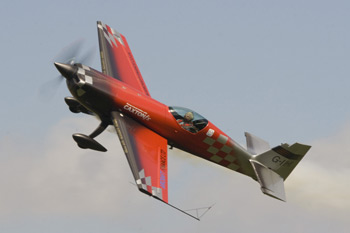 In near perfect conditions Little Gransden held its small but exciting press day. Anglia TV's cameraman attended the event, along with various newspaper reporters and photographers. As usual Mark Jefferies put on a stunning display in his (new for this season) Extra 300SC. Dave Poile MBE was on hand for interviews. Several classic cars arrived for a photo shoot with the Spartan, and an added bonus was Dennis Neville and his wife who dropped in with their aircraft. 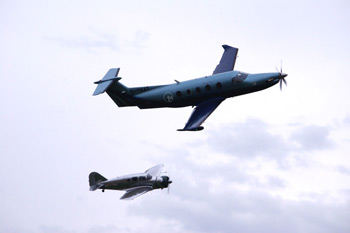 Little Gransden the home to the Charity Car and Air Show. For the last sixteen years supporting the BBC Children in Need appeal. Bringing together pilots and aircraft and thousands of visitors from all around the country. Once again organised by Dave Poile and Mark and John Jefferies, with their fantastic team of volunteers, not forgetting our resident commentator FlyPast editor Ken Ellis.

The displays this year included a Bell 47 (G-MASH) flown by Tracy Martin, the Spartan flying with the Pilatus PC-12, through to warbirds including Peter Vacher's Hurricane Mk I, Peter Teichman in the P-40 Kittyhawk and Maurice Hammond in his P-51 Mustang Janie.

Another fantastic day out for the family with the added bonus of vintage cars, motorcycles and tractors, joined together with large exhibitions in the hangars, plenty of good food and camaraderie of the great British public.