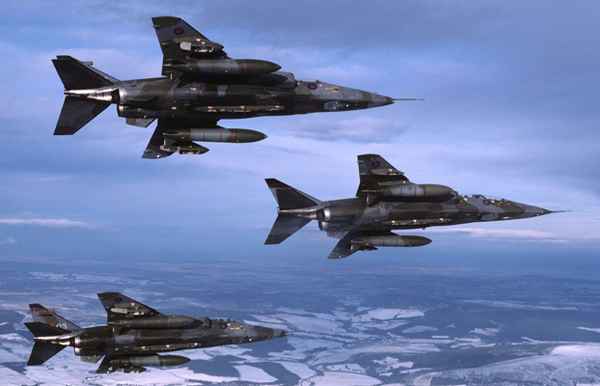 The Jaguar first flew in 1968 and served with the RAF (Royal Air Force) at various RAF stations in Germany and also in Great Britain at RAF Coltishall, RAF Lossiemouth and prior to retirement at RAF Coningsby. Overseas operators included France, India, Ecuador and Oman, in fact India and Oman still operate Jaguars at the present time.

The RAF disbanded its last squadron of Jaguars, No. 6 Squadron at RAF Coningsby, Lincolnshire on 31st May 2007. Shortly after the aircraft were flown on their last flights for use as instructional airframes at Cosford.

A number of aircraft are also kept on charge at RAF Cranwell for ground handling training.

The last ever British Jaguar flight was carried out from Boscombe Down in Wiltshire on 20th December 2007.

No. 6 Squadron Jaguars at Coningsby 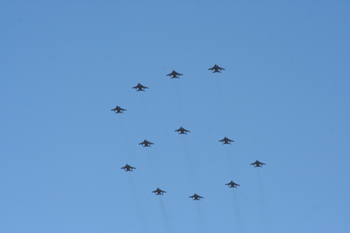 On 1st April 2006 RAF Coningsby in Lincolnshire became the new home to the RAF's last Jaguar Squadron. No. 6 Squadron having just moved from their old base at RAF Coltishall in Norfolk on their arrival the Jaguars were housed over on the far side of Coningsby's Airfield in the hardened shelters formerly used by the stations F3 Tornados. When 6 Squadron arrived at Coningsby it was with the hopes that they would operate their Jaguars until sufficient numbers of Typhoons were available to re-equip the

No. 6 Squadron Jaguars at Coningsby - Gallery 2

As it turned out the Jaguars were going to be used for just over twelve months until the squadron disbanded and the aircraft retired. When news broke that the disbandment was imminent it was decided by the squadron that the Jaguar should go out in style. To this end the skies around Coningsby were graced by several mass flypasts made up by the Jaguars in the shape of a number six.

The squadron disbanded on 31st May 2007 and shortly afterwards the aircraft were flown in several batches over to their new home as ground instructional airframes at Cosford College.

RAF Cosford has been known for its training of RAF engineering staff. In some of Cosford's hangars redundant Jaguar aircraft can be found. Some of the these aircraft are early Mks of Jaguar, still painted in their camouflage paint schemes. These aircraft are used to train a new generation of RAF personnel in all aspects of engineering, such as undercarriage retraction, engine removal and all other skills associated with aviation engineering.

RAF Coltishall was home to the Jaguar for over thirty years. After the Germany Jaguar squadrons came back to this country and the eventual move from Lossiemouth by 16 R Squadron, Coltishall was by then the home to four squadrons of Jaguars.

With the gradual run down of the Jaguar force 16 R and 54 Squadron were the first to disband, followed by 41 Squadron which then left No. 6 Squadron, which moved to RAF Coningsby in Lincolnshire on 1st April 2006.