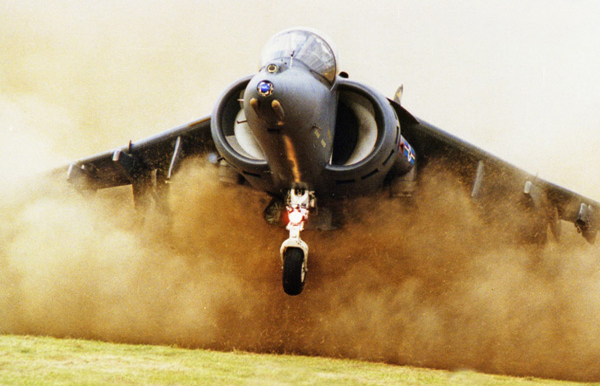 The Harrier, the world's first vertical takeoff fighter evolved from the P.1127 project and the follow on from this, the Kestrel. The Harrier has gradually evolved through the GR1-GR3 and the AV-8A, the American version. Later aircraft were upgraded to the GR5, GR7 and the current Mk GR9. Other Mks of Harrier are also operated by the Indian Navy and Spain.

The Harrier has had a long and successful detachment of several years operating in Afghanistan, which it has recently returned from in time to celebrate its 40th anniversary at RAF Wittering. The Harrier is unrivaled throughout the world and plays a major part both on land and sea.

On Friday 26th March, a group of like-minded enthusiasts and photographers trekked the well-worn path through the approach lights, up to the perimeter fence to capture (for posterity) what turned out to be No. 4 Squadron's last diamond nine flypast.

Having braved strong winds and cold weather we were not disappointed. First to taxi for takeoff was a 100 Squadron Hawk (camera ship), followed by the nine Harriers, which took off and formed up before carrying out two diamond nine formations and landing back at Cottesmore.

RAF Cottesmore became the home to the Harrier with the arrival of the two squadrons from Germany. Number 3 (F) and Number IV Squadron arrived in 1999, shortly followed by Number 1 (F) which we moved over from RAF Wittering.