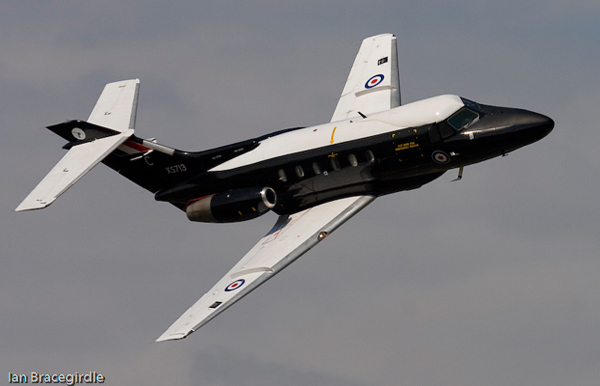 Dominie T1 aircraft are operated by 55 (Reserve) Squadron based at RAF Cranwell, Lincs. The aircraft have been in service since 1965 and were previously based at RAF Finningley in Yorkshire until the station closed in 1995. It is used to train weapons systems, officers and operators, air engineers and loadmasters.

With the announcement that the Dominie aircraft of No. 55R Squadron at RAF Cranwell were going to be retired early, several flypasts were planned. The first was a three-ship round robin taking in some of the northern airfields which included RAF Kinloss, Leuchars, Leeming, Coningsby, Waddington and the Humber Bridge.

The second flypast was a six-ship which was the practice flypast for the retirement and was carried out in near perfect weather conditions. On 18th February the aircraft overflew several airfields including RAF Coningsby and also Lincoln Cathedral.

The next flypast was the southern part of the country which included RAF stations at High Wycombe, Wyton, Marham, and East Midlands Airport.

The Dominie finale was on Friday 20th February at RAF Cranwell. With a gathering of several hundred visitors which included some of the original flight and ground crews and their families, six Dominies carried out a synchronised start up before departing Cranwell. The aircraft overflew Trenchard Hall before returning overhead the airfield for a final break and a flypast along the front of the hangars by each aircraft before landing. Also of note was the taxi back in, with the aircraft all shutting down together. The last official Dominie flight was carried out on 11th February when XS709/M was delivered to The Cosford Air Museum. The remaining airframes which were available were put up for tender and flown down to Kemble Airfield awaiting delivery to their new owners.