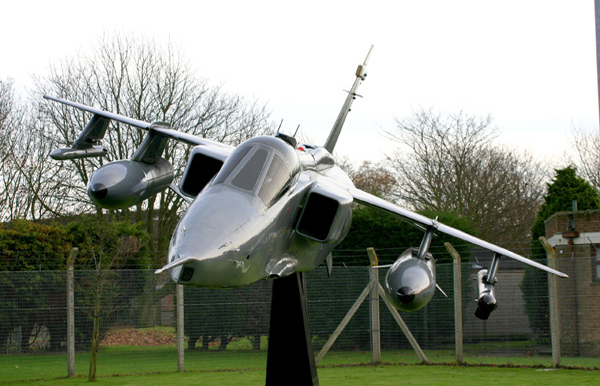 RAF Coltishall was opened in 1940 and was originally built as a bomber base. Coltishall was home to a variety of aircraft including Blenheims, Hurricanes and Spitfires and after the Second World War became the home of Polish squadrons until they returned home.

In later years other aircraft were based at Coltishall including Mosquitos, Meteors, Javelins and Lightnings and from 1963 The Historic Aircraft Flight now known as The Battle of Britain Flight. The last Lightnings left Coltishall in 1974 and later in the year Coltishall became a Jaguar base with the arrival of No. 54 Squadron. In fact the Jaguar served at Coltishall without a break for over thirty years.

Coltishall was also the home of search and rescue (SAR) helicopters of 22 and 202 Squadrons. When Coltishall had its full complement of Jaguars there were four Squadrons, No. 6, No. 16 R, No. 41 and No. 54. When it was announced that Coltishall was to close this was going to bring an end to this historic station, which was the RAF's last Battle of Britain base.

The first Jaguar squadrons to disband were 16 R and 41 Squadrons, who disbanded on 11th May 2005. With the final squadrons, No. 6 and 41 departing on 1st April 2006. RAF Coltishall finally closed its gates on 30th November 2006 with a celebration which included a flypast by four Jaguars from No. 6 Squadron at RAF Coningsby, Lincolnshire and a flypast and display by a Hurricane from The Historic Aircraft Collection (HAC) based at the Imperial War Museum at Duxford, which was flown by Squadron Leader Al Pinner OC BBMF.

Finally Coltishall's two gate guardians went to new homes, with the Hurricane going to High Wycombe in Buckinghamshire and the Jaguar moving down the road to Norwich in the grounds of Norfolk County Council.

Jaguar XW563 was removed from its position outside RAF Coltishall’s main gate on 27th February 2007, prior to being repositioned at Norfolk County Hall in Norwich. XW563 was the second Jaguar to be built and retired from flying duties in 1977 after 678 hours of flight testing, later being used for weapons loading training before becoming RAF Bruggen's gate guardian in Germany. On the closure of the base in Germany XW563 was moved to the final home of the remaining Jaguar squadrons at Coltishall, where for five years it continued to be a memorial to the personnel who lost their lives while serving with the Jaguar Force. Prior to the closure of RAF Coltishall, the Station Commander (amongst other senior officers) were keen that the aircraft should stay in Norfolk as a tribute to the uniquely close sixty six year relationship that RAF Coltishall had with the county. 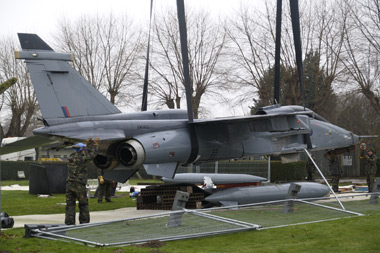 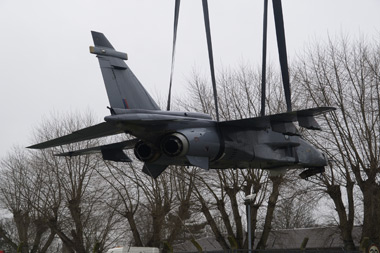 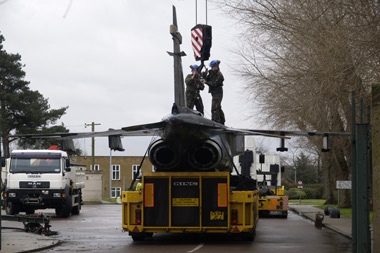 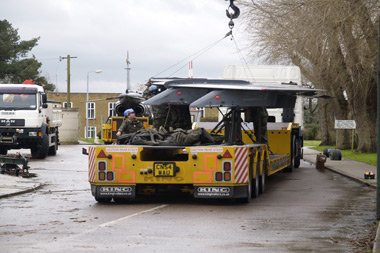 With the agreement of The Ministry of Defence, the iconic gate guardian was duly repositioned outside Norfolk County Hall in Norwich. On Friday 22nd June 2007 the aircraft was formally presented to the people of Norfolk by Air Vice-Marshal Chris Harper, Air Officer Commanding No 1 Group Royal Air Force, himself a former station commander at RAF Coltishall. 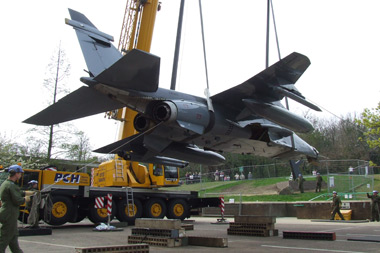 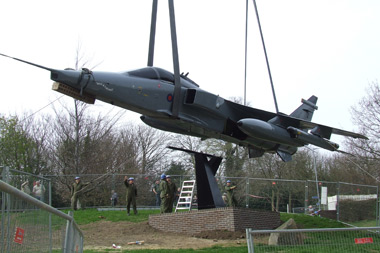 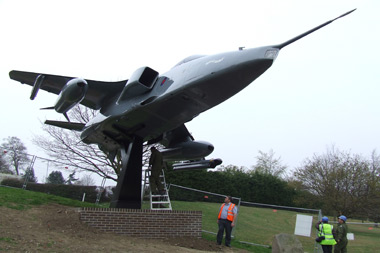 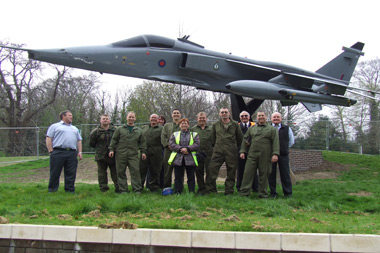 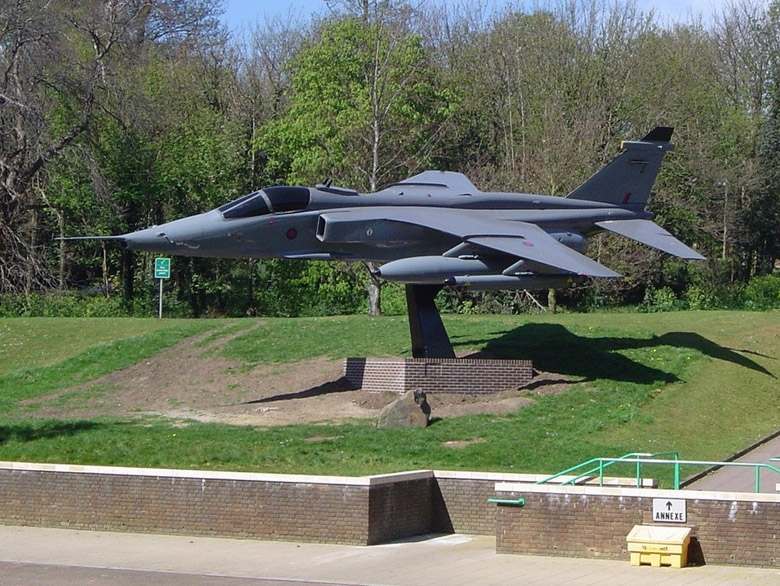 Jaguar XW563 in its new position outside Norfolk County Hall in Norwich. Photo by Keith Sowter 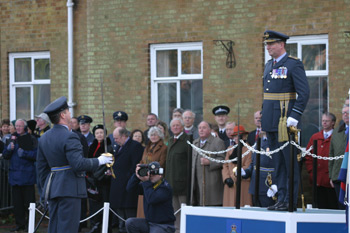 The final curtain came down at RAF Coltishall on 30th December 2006, when a large group of enthusiasts and local people congregated outside Coltishall's historic headquarters to witness the last parade and flypast of this World War II fighter station. The RAF servicemen who took part in the parade were joined by The City of Norwich Pipe Band.

The reviewing Officer, Air Vice-Marshal David Walker CBE AFC took the salute as a flypast of four Jaguar aircraft from No. 6 Squadron at RAF Coningsby overflew the parade. Closely followed by The Historic Aircraft Collection's Hurricane from Duxford which was flown by Squadron Leader Al Pinner Officer Commanding The Battle of Britain Memorial Flight.

As the parade marched off the station a short ceremony was performed to lock Coltishall's gate for the last time. This was followed by Squadron Leader Pinner carrying out a spirited flying display in the Hurricane just outside the stations main gate. 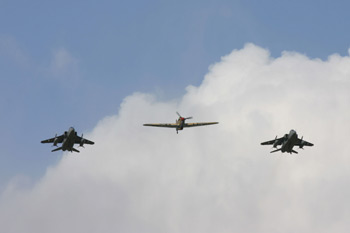 RAF Coltishall opened its gates to around 1,000 enthusiasts for the last time on 16th September 2005 for the last ever Coltishall Enthusiasts Day. As well as Coltishall's resident Jaguars aircraft arrived from all around the country and a few examples from far-flung places. It was a diverse mix of aircraft starting with World War II aircraft such as a Mk II Hurricane from Duxford, through to classic jets such as the Gnat and Jet Provost, to more modern aircraft like the F-15 from Lakenheath and the Typhoons from Coningsby.

Weather conditions were not perfect but between the intermittent showers and sunshine a good day was had by all. With good access around the taxiways and pans for the photographers and static displays in the hangars. Probably the highlight of the day was a flypast by the Hurricane and a pair of No. 6 Squadron Jaguars.

As usual a fantastic effort by Mick Jennings and his helpers bringing together all these aircraft and people for the final Coltishall photocall. 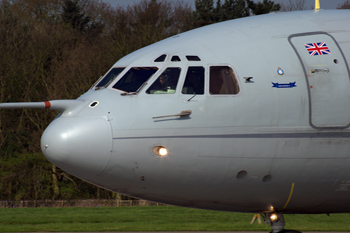 On 22nd April 2005 a pair of VC10 aircraft, XV108 and XV109 visited RAF Coltishall, VC10 aircraft from RAF Brize Norton have been supporting Jaguar operations throughout the world. Not only in the transport role but also air-to-air refueling Coltishall's Jaguar aircraft around the UK. As with most fighters the Jaguars only have a limited range and are escorted by a VC10 or TriStar when transiting to an overseas detachment. 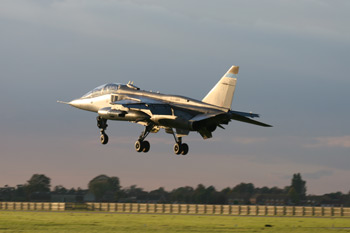 RAF Coltishall was home to the Jaguar for over thirty years. After the Germany Jaguar squadrons came back to this country and the eventual move from Lossiemouth by 16 R Squadron, Coltishall was by then the home to four squadrons of Jaguars.

With the gradual run down of the Jaguar force 16 R and 54 Squadron were the first to disband, followed by 41 Squadron which then left No. 6 Squadron, which moved to RAF Coningsby in Lincolnshire on 1st April 2006.