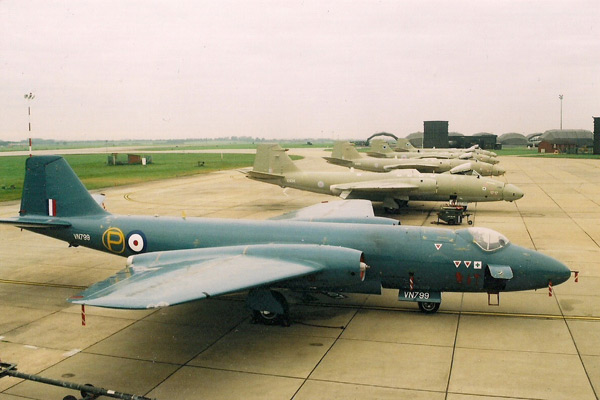 The English Electric Canberra prototype was first flown by Wing Commander Roland Beamont on 13th May 1949. The first squadron to re-equip with the Canberra was 101 Squadron at Binbrook in Lincolnshire.

The Canberra was such a versatile aircraft that over fifteen different Mks were either built or converted, with variations being used all over the world with the Royal Air Force (RAF) and the United States Air Force (USAF) being the main operators. Other countries also used the Canberra including Argentina, Australia, India and Pakistan and Germany to name a few. The Canberra served with the RAF until July 2006 when the last three PR9 aircraft left RAF Marham for their new home at Kemble in Gloucestershire.

The Canberra, designed by Teddy Petter in the late 1940s and still being used around the world albeit in very small numbers, and still going strong over sixty years after its first flight.

As of July 2009 to our knowledge there are only three flying examples of the Canberra in the world, two WB57 aircraft with NASA and TT18 WJ680 now painted to represent an Australian B20 Canberra at Temora in Australia.

Two Canberras are kept at Coventry Airport under the care of Classic Flight, the blue T4 WJ874 and B2/6 WK163. Also WT333 an Ex Bedford trials aircraft is kept in a taxiable condition at Bruntingthorpe, Leicestershire.

Finally what became of the three PR9s, XH131 is reputedly going on static display at a museum in Ireland, XH134 the operators are hoping to fly on the air show circuit and XH135 is being brought back to taxiable condition. 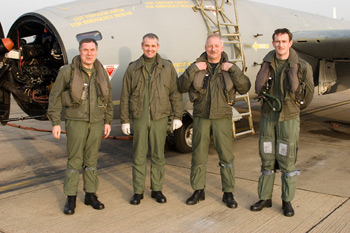 After the Canberra PR9s returned from their last detachment July 2006 became a very busy month with the run-up to the PR9's retirement and the squadrons disbandment. Numerous practice displays were flown by Sqn Ldr Terry Cairns and Sqn Ldr Roger Newton in readiness for their display at RAF Waddington, RIAT at Fairford and the RAF's final Canberra display at Marham's Families Day. During this hectic time a pair of PR9s flown by Sqn Ldr Dave Piper, Sqn Ldr Gary Winwright, Flt Lt Mike Leckey and Flt Lt Colin Fryer took off from RAF Marham for a final air-to-air photo shoot. In fact this may be the only time that two PR9s have been filmed in formation for many years. 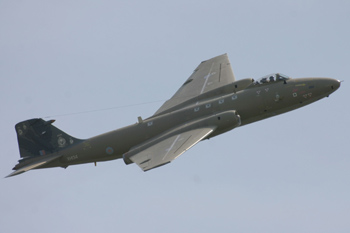 Over a few weeks period Terry and Roger could be seen putting XH134 through its paces. The clean lines of this aircraft gracing the skies overhead Marham, with the PR9's final flypast and blue note reverberating around the airfield at the end of each display.

The culmination of these practices were the four displays over the weekends of Waddington and Fairford's air displays with the last ever RAF Canberra display being carried out at RAF Marham's Families Day on 27th July 2006. 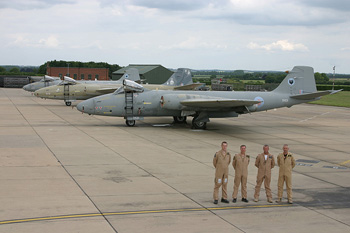 Two PR9 Canberra aircraft XH131 and XH135 from 39 Squadron arrived back at RAF Marham in Norfolk from the squadron's last detachment at Seeb in Oman. The Canberras were escorted back to the station by two GR4 Tornados from Marham. The five months detachment was supported by ground and aircrews rotating every few weeks.

On 1st September 2005 the Blue Canberra WJ874 from 39 Squadron at RAF Marham made its last operational flight (a round robin), starting from RAF Marham overflying airfields and RAF stations throughout the country which have had Canberra connections over the last 54 years.

The crew of the Canberra for this unique flight, Squadron Leader Terry Cairns (pilot), Wing Commander Clive Mitchell (navigator) and their passenger Air Officer Commanding No. 3 group Air Vice-Marshal Andy White. With good weather conditions the press and TV cameras were out in force to witness the aircraft take off and then return some time later after its trip around the country. 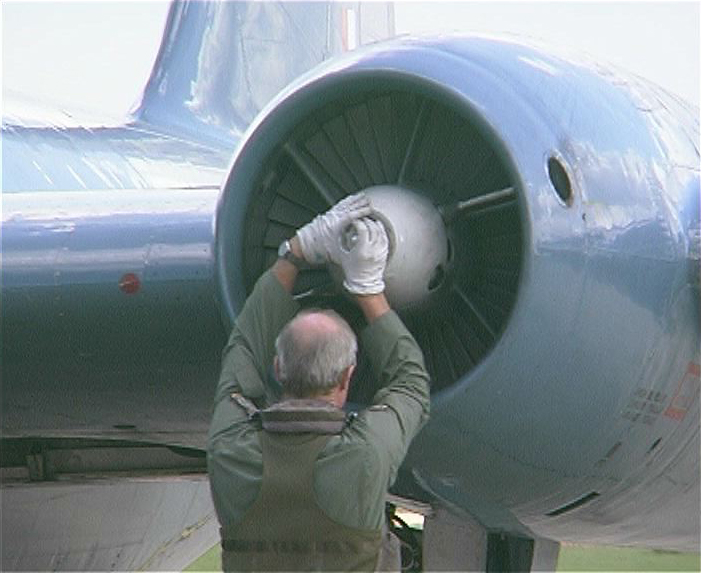 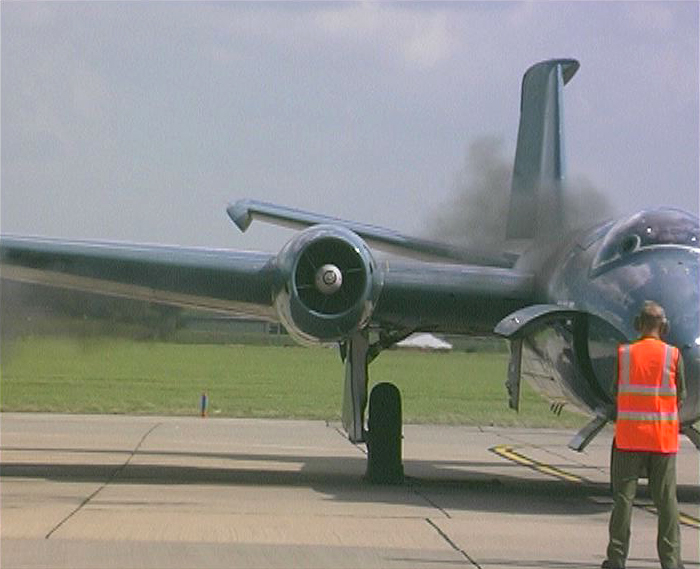 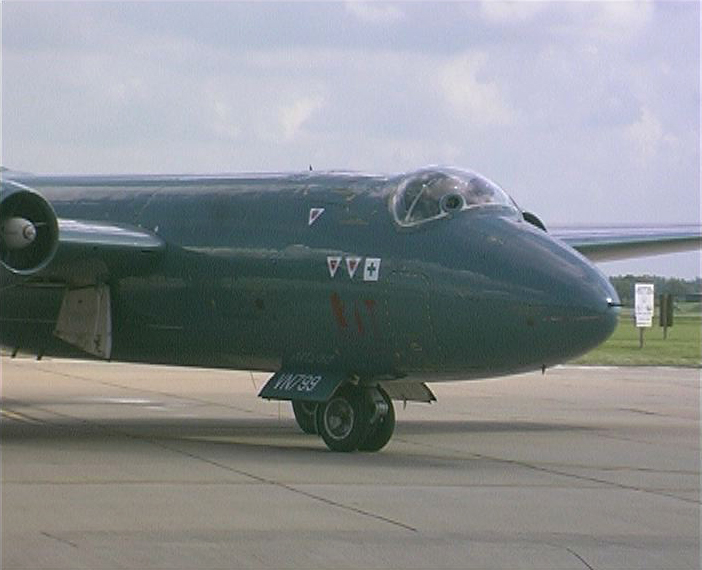 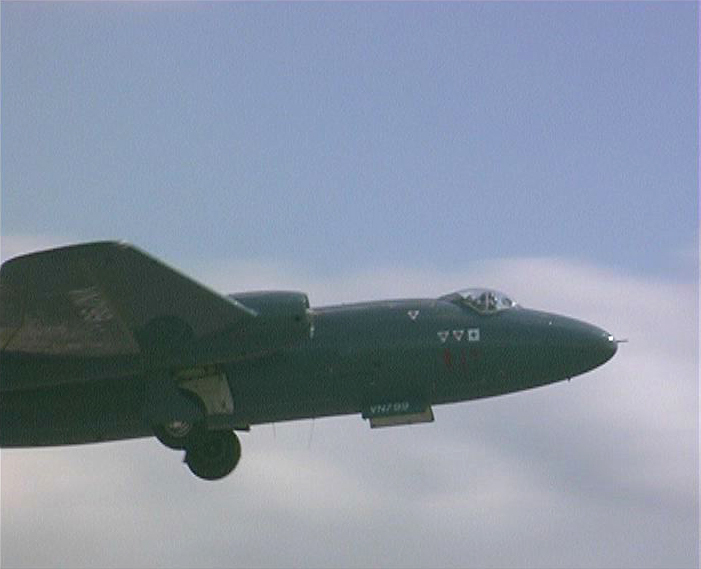 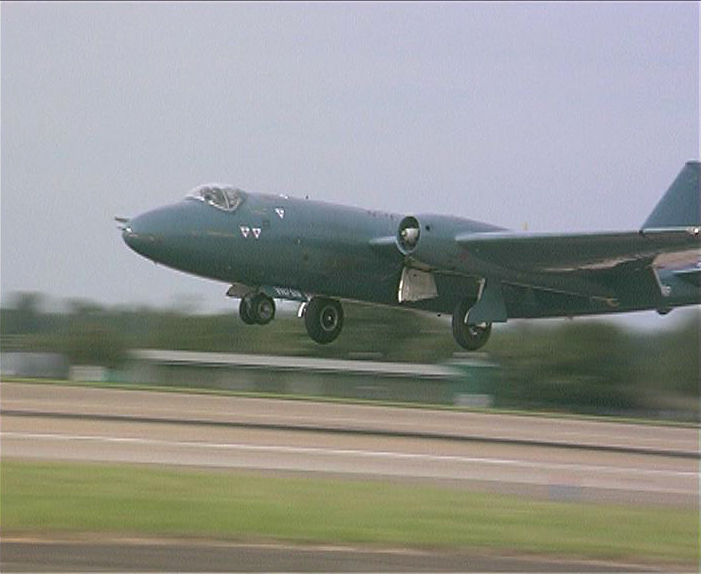 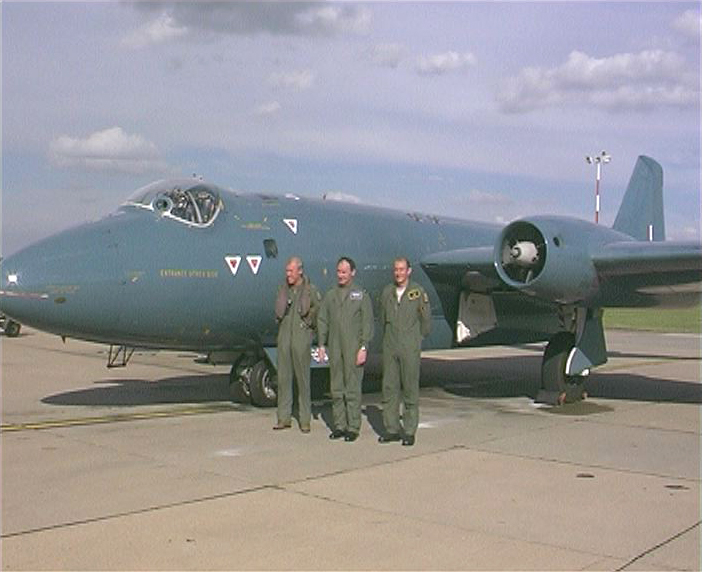 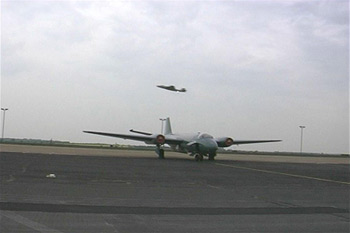 On 13th May 1949 Wing Commander Roland 'Bea' Beamont carried out the first flight in the prototype Canberra at Warton in Lancashire.

To celebrate this anniversary 39 Squadron at RAF Marham have had Canberra T4 WJ874 painted in a new gloss blue paint scheme, similar to the original aircraft. During the week leading up to the anniversary Squadron Leader Terry Cairns (pilot) and Squadron Leader Brian Cole (navigator) did several practice displays in WJ874 in readiness for a busy display season at air shows throughout the country.

Notice!
The gallery of images below have been copied from old negatives so please excuse the quality of them. 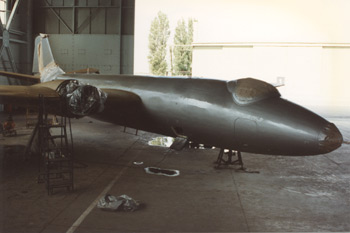 WK163 on retirement from the Royal Aircraft Establishment at Bedford was delivered to Bruntingthorpe Airfield in Leicestershire, having been purchased by Peter and Francis Gill, along with XH568 and WT333 to be operated under the Classic Aviation banner.

Andy Rake (the pilot for this trip) ferried 163 over to RAF Wyton, which was Classic Aviation's maintenance base at the time where she was duly parked in Number 2 hangar. Classic Aviation's dedicated team set about the necessary engineering work on the aircraft, including fitting a new perspex nose assembly. Stuart Ross proceeded to rub down, mask up and respray the aircraft, almost single-handedly (a major project). Michael Murrey (a local sign writer) proceeded to paint the scorpions on both side of the aircraft's nose, which completed the paint scheme which the aircraft was finished in forty years previously. The aircraft was duly towed from the hangar and Dave Piper (the pilot) and Dusty Miller (the navigator) flew the aircraft for an air test, ready for the first air display of the season at the Duxford Airfield in Cambridgeshire. 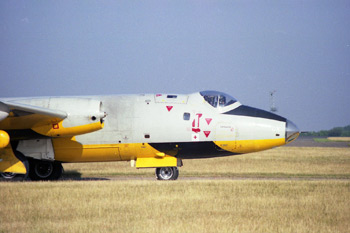 100 Squadron arrived at RAF Wyton in January 1982. They brought their Canberra B2s and E-15s from RAF Marham in Norfolk. Also arriving to join the squadron were TT18s from St. Mawgan in Cornwall and several PR7s from 13 Squadron who had just disbanded at Wyton. With over twenty aircraft on strength this made 100 Squadron one of the RAF's biggest squadrons and brought together all the RAF Canberras back at RAF Wyton.

100 Squadron carried on operating the Canberra up until September 1991 when most of their aircraft were retired and replaced by the BAE Hawk.

Images courtesy of The Cannon Collection