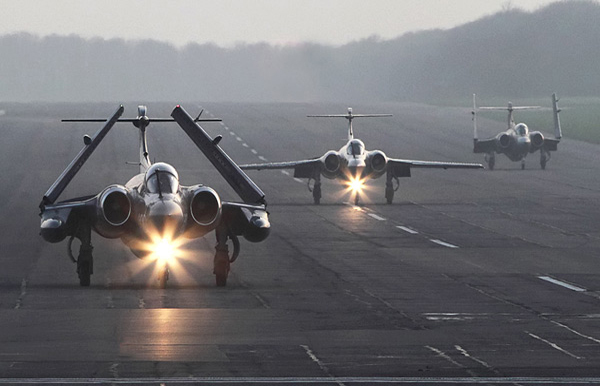 The Buccaneer Aviation Group are an organisation of volunteers who are dedicated to the preservation and maintenance of two Ex Royal Air Force Buccaneer aircraft in fast taxi condition.

We are the only group in the world who are dedicated to this aircraft type.

We offer aviation enthusiasts the unique opportunity of becoming involved with these aircraft through our website, as well as experiencing them in person at our Bruntingthorpe Airfield base in Leicestershire, England.

Saturday 24th March 2012, The Buccaneer Association held their first open day at Bruntingthorpe Airfield in Leicestershire for 2012. The event was well attended by Ex Buccaneer air and ground crews as well as many aircraft enthusiasts. The star attraction was Buccaneer S2B repainted as she would have been when in service with the RAF. XW544 made her entrance from out of the mist along Bruntingthorpe's vast runway to the joy of the waiting enthusiasts. Later the group's pair of aircraft were on show and carried out individual runs. Later in the afternoon all four of Bruntingthorpe’s resident Buccaneers were lined up for a photo shoot and later as dusk approached the three taxiable aircraft carried out a streamed fast run.